From the Summer Issue of the electronic “Salaam Quarterly Bulletin”, No.25, May 2018

Egypt — a country where civilization originated, a large country with a population of 95 million people with a high proportion of young people and still having considerable influence in the Middle East region. In the presidential election held in late March, President el-Sisi won the victory with the support of the majority of the people. This article reflects on his government’s records and achievements over the past four years and elaborates the prospects of the central policy of the president over the next four years.

I. Results and achievements of the el-Sisi administration over the past 4 years

The first was to achieve a major reform of politics 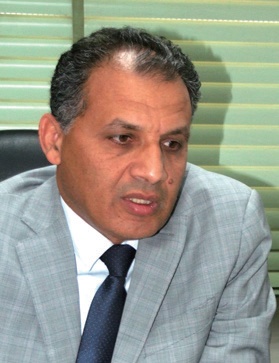 Mohamed Farahat, researcher at the Al-Ahram Center for Political and Strategic Studies

Mohamed Farahat, researcher at the Al-Ahram Center for Political and Strategic Studies, listed as one of el-Sisi’s achievements the accomplishment of a major political reform by eliminating all elements that had been tainted by the former government, namely the ‘Morsi Muslim Brotherhood Administration’ which advocated Islamization of the nation and the world by application of Islamic law.

Specifically, after the June, 2013 revolution (footnote), the el-Sisi Administration revised the Constitution which had been changed in a wrong direction by the Muslim Brotherhood Administration, led national public opinion, conducted a parliamentary election and subsequently the presidential election. Thus, it succeeded in creating the basic framework of the nation. 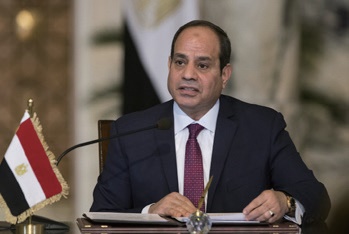 Specifically, he stresses that all organizations and institutions should be strongly united on the basis of ‘respecting each other,’ and all individuals and organizations/agencies should accept to ‘dedicate themselves for the nation.’ In other words, itis not interested only in their own interests but has always he established a posture to give priority to serving the nation always rather than being interested only in their own interests.

Indeed, in countries that have fallen into civil war such as Syria, Yemen, Libya, all political forces are challenging the nation, and as the result the nation is headed toward complete collapse.

However, the situation in Egypt is opposite, and all political forces understood that each organization and agency will become strong by sacrificing themselves and contributing for the nation.

Through this presidential election, the people did not want chaos of the Egyptian society, supported the nation, and chose Egypt to remain stable.

Third, it has developed economics and society 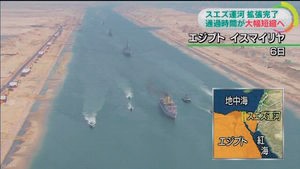 At the Suez Canal connecting Asia and Europe, expansion construction was completed to shorten the time required for the ship to pass.

After the January, 2011 revolution triggered by the Arab Spring that caused the establishment of the Morsi Muslim Brotherhood government, all Egyptians considered only politics, not paying attention to the development of society and the economy. However, President el-Sisi made a speech focusing on economic and social issues almost everyday in the past four years, and as the result the people in general also began talking about economic and social development.

President el-Sisi has implemented a huge national development project not only in one field but also in various fields such as industry, oil, road, and fishery. Even in term of the area, those projects are implemented not only in special areas, but also in the entire Egypt regions, such as the upper Egypt region, the western region of the Suez Canal, and the Sinai Peninsula. A great example of that is the capital relocation project to overcome deterioration of urban functions due to population overcrowding.

During the Mubarak regime, stories about the development of the Sinai Peninsula came up many times but in fact it has remained unchanged as an isolated area. The current Sinai peninsula has been well developed and connected with other cities in Egypt. They have become deeply tied economically. This is a great achievement in the past 4 years. 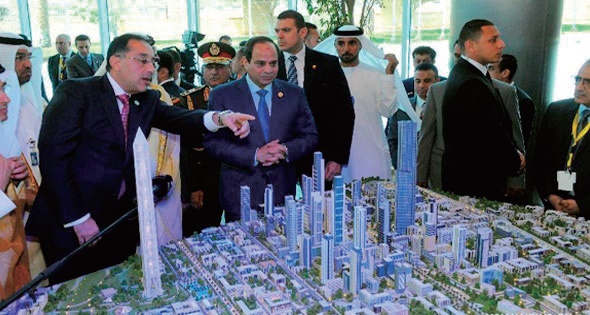 In anticipation of the declining capital function due to the explosive increase in the population, construction of a new capital is planned in between the current capital city Cairo and Suez.

Although this problem has been postponed many times, President el-Sisi has taken a shift from a fixed exchange rate system to a floating exchange rate system in order to “begin real economic reform.” Although this was a big challenge, he stated that “All Egyptians and political forces are well aware of this reform.” Through the shift to the floating exchange rate system, the people were placed in a tough position, but they have come to understand the realities of the economy correctly. Many evaluated that the black market disappeared and a healthy economic society began to emerge as the result.

The fifth is that war against terrorism was successfully waged 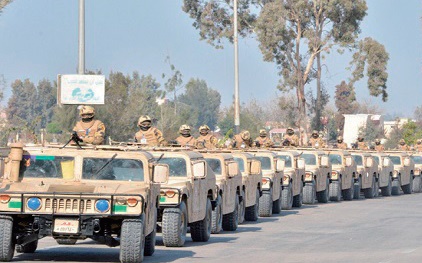 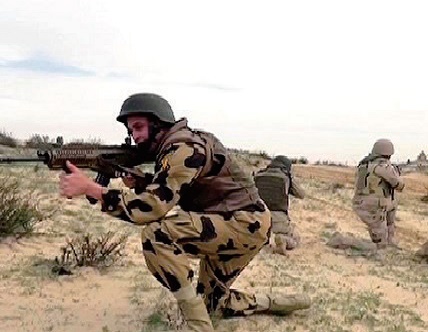 This is the greatest accomplishment, eradicating terrorism and waging the battle against hotbeds of terrorism.The military has been implementing a strategy called ‘Sinai 2018.’ It has conducted a strategy to completely eliminate terrorists and IS groups from the Sinai Peninsula and almost completed it.

Specifically speaking, extremists are no longer able to take the hero as an extremist toward Egyptian people in general. Even if they solicited people, such solicitation did not lead to mobilization to the demonstration, making it difficult to talk on the streets and mosques. In other words, extremists lost an ability to speak with the Egyptian general.

This is the great accomplishment of President el-Sisi, and all Egyptians are clearly aware of this change. The complete expulsion of terrorists is also bringing back the tourism industry.

Those results of the past four years brought good effect on domestic Egyptians and on Arab and Middle Eastern countries.

Egyptian people have come to understand how their own nation of Egypt plays an important role in maintaining public security in neighboring Arab nations and Islamic nations. For example, it is an understanding that Egypt cooperates with Saudi Arabia and Persian Gulf nations to exclude Qatar and control terrorism, and that Egypt, together with moderate Arab nations, protect Syria and Yemen from Qatar, Turkey and Iran and strive to maintain security. 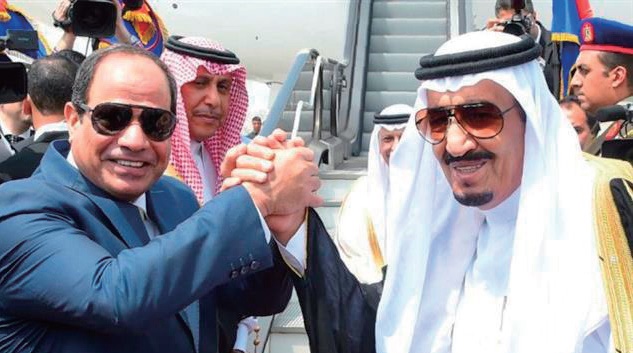 Egypt also plays an important role to help Libya in cooperation with Algeria and Tunisia. In other words, those nations came to correctly understand that Egypt is considering to control terrorism over the entire Middle East re-gion rather than just thinking to control terrorism inside its territory, and appreciate the role of Egypt. Because the Islamic State (IS) knows that the Egyptian challenge is contributing to the Arab and Middle East region as IS spreads to many nations.

Egypt transformed its currency system into a floating exchange rate system as the enormous cost for aforementioned achievements caused inflation.

There are two types of solution for inflation problem. One is a way to raise the price gradually and the other is a shock therapy in which the government suddenly raises the price. Egypt chose the second type to complete economic reforms at once. Thanks to that, prices have soared, but the public has come to understand. 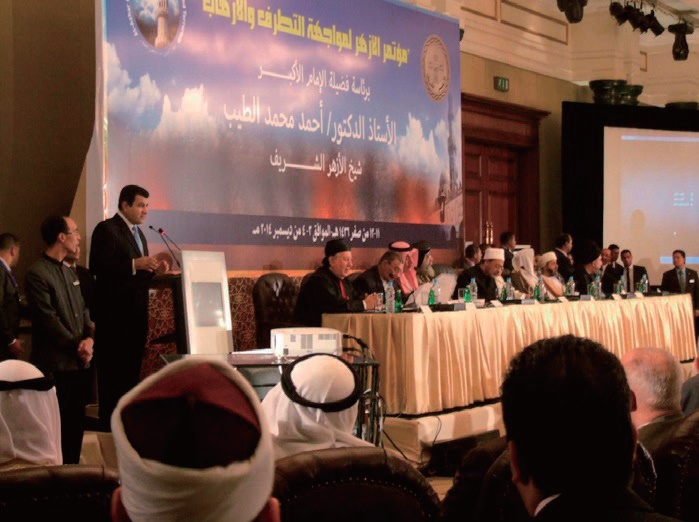 Under the wish of President el-Sisi, Azhar, the center of the Sunni, recognized the inadequacy of Islamic education, held a convocation to announce the start of moderate Islamic education denying violence for the people in Egypt and overseas.

Also, what cannot be overlooked in the Egyptian reform is religious reform promoted by President el-Sisi.

It is that he appealed to Islamic leaders of Egypt about the necessity of religious reform.

He urged them to eliminate all sentences justifying violence from past Islamic books and to conduct through education to convert blind Jihadists into conscientious Muslims throughout the nation. President el-Sisi respects and guarantees the freedom of religion and visited the Coptic Church many times to normalize relationship with the church, considering the fact that relations with Coptic Christians (Egyptian Christianity), which accounts for 10% of the population, worsened as a result of Islamism promoted during the Morsi administration. He modified the trajectory from deviant Islamism, guaranteeing freedom of religion to the people.

II. What will the el-Sisi administration do in the next 4 years?

Mohamed Farahat talked about the policies the el-Sisi administration will implement over the next four years, and listed 3 major points.

The first point: Totally completing the national project which started in the previous 4 years

In other words, the administration will concentrate on completing projects such as the relocation of the capital, the construction of the new capital airport, as well as projects in the upper Egypt region, the western area of the Suez Canal west and the Sinai peninsula. It will also concentrate on completion of projects in various fields such as industry, oil, road, and fishery.

One businessman interviewed during the presidential election said that he would like to “support the president in the process of the work,” expecting the completion of each project currently underway.

The second point: Improvement in the health field 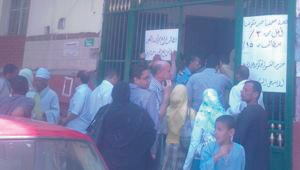 There are scenes in the hospital where many patients line up. This is a scene of one hospital in Asyut.

It is urgent to establish a medical system that can respond strongly to hepatitis C, which is spreading in Egypt. There are also many cases of heart disease and diabetes, and improvement of hospital system, expansion of hospital, construction of new hospital where poor patients line up are urgent. President el-Sisi has expressed his willingness to work hard to establish a medical system, including affordable medicines that can be offered to all patients. First of all, since investigation on the current situation and huge investment are needed, the administration will have to make a project and challenge a difficult task.

The third point: Area of education

The problems surrounding education sites accumulate, including school shortage caused by the population increase, a capacity increase of each class, a collapse of class due to teacher shortage caused by low salary to a teacher (It is becoming a norm that teachers do not show up in the classroom and let students to self-study, while working part time in high-paying private cram schools). The student who was told to make a presentation in front of the classroom is said to be unable to walk to the front due to overcrowded condition and forced to hop from one desk to another with shoes on. With this kind of condition, morality and courtesy will not be nurtured. 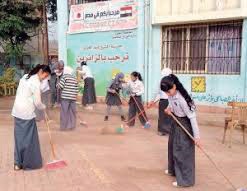 President el-Sisi had a sense of crisis and decided to introduce Japanese style education as part of his educational reform. The president described the Japanese as “walking Koran” and highly evaluate as “people who do not know the Koran, but who are implementing the teachings of the Koran.” It is because he has observed the Japanese who can act naturally in virtues such as diligent attitude, courtesy, humility, keeping time and compassion.

According to the plan, first of all, experiments are carried out repeatedly at the pilot schools, we conducted experiments repeatedly, and Japanese style education including special activities (such as character education through activities such as cleaning, day-on, athletic competitions and cultural events) is provided at about 200 schools by September next year.

The true value of Japanese style education is tested to see whether it can successfully resurrect the collapsed education system. Low-key but steady results are expected for the future development of Egypt.

More contents available in the electronic “Salaam Quarterly Bulletin”, No.25, May 2018.

June, 2013 revolution
During the June revolution which brought the collapse of the Morsi-Muslim Brotherhood regime, followers of various religions such as Christianity and Islam, shouted out Morsi’s expulsion. 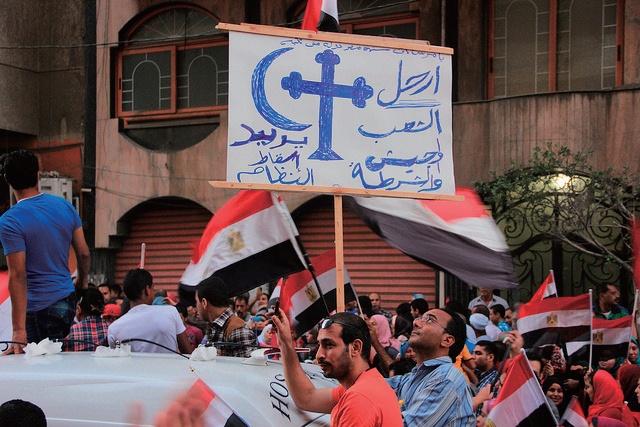