I would like to extend my sincere congratulations on the 50th anniversary of Independence of Kuwait.

On the national emblem of Kuwait, Dhow, a sailing ship, on the waves, embraced by outspread wings of a golden falcon, which is the symbol of the Quraysh tribe to which Prophet Muhammad belonged, is described.

Kuwait located in the northeastern corner of the Arabian Peninsula, was an important point for land traffic, not only because it was a transit point for heading to India, Persia (now Iran) and down to Arabian Peninsula, but also because it was situated on the way to Basra and Baghdad for those coming from the Gulf region. It was also known as a coastal trading port which dealt with various Arabian ports and Persia.

After 1752 when Kuwait was formed into a city state, Kuwait people depended their economic activities mainly on the sea such as fishery and collecting natural pearls, which developed into marine trade among the Arabian Gulf’s coastal countries. A sailing ship unique to Kuwait, which is called Dhow, whose building technology is said to have been bought from India, was gradually improved by Kuwaiti people’s creativity, and gave birth to numerous kinds of Dhows.

Since 1900’s, Dhows developed into wooden sailing ships for coastal trade, and moreover came to play the hero of marine trade, sailing far into India and Eastern Africa. Around 1940, as many as 150 Dhows of 200 ton level bustled about the Kuwait Bay.

After oil was discovered, sailors and captains of Dhows who had been so active began to move to oil-related companies. So nobody navigated Dhows any longer. Dhow whose name is ” the Fatech-el-Khair” shown in the picture was sold to a Persia captain in Basra in 1952, which marked the end of era of the marine trade where main players were Dhows.

In 1994, Dr. Hijji discovered the Fateh-el-Khair which he had been looking for. The Kuwait Foundation of Advancing Science (KFAS) immediately decided to buy it back, and began to repair it. The rebuilt Fateh-el-Khair has been exhibited in the Scientific Center, Kuwait whose construction was completed in 2000.

Kuwaiti people bought back and recovered the Dhow which was once sold to a foreign country to hand their pride and tradition to the future generations. The name of Dhow, Fateh-el-Khair means “the beginning of happiness”. 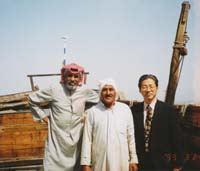 Kuwaiti people are said to be most progressive among the Gulf countries. From this episode, we understand how much they care about their history and tradition. When the age sailed out to the third millennium, His Highness Emir of Kuwait declared the goal of “making Kuwait the center of finance and world trade” and adopted the developmental plan with a huge amount of fund injected.

For the people who used to travel the vast desert, riding camels, stars must have been the guides they could depend upon. The sharp insight into the future which has been fostered under such environment, brought the people to the ocean, and later settled and built the State of Kuwait. The new goal which Kuwait put up seems to be the one based on the return to the beginning.

We Japanese also are suddenly reminded of the history of our country as a marine nation, and seeking after the image of a marine state worthy of the new era.

I wish from the bottom of my heart that the new and stronger bondage would be tied between Kuwait and Japan.

Thank you very much.

The Silk Road on the Sea in the New Millennium

On behalf of the Japanese people, I would like to extend a heartfelt appreciation on the April 18 decision by the Kuwaiti government on offering five million barrels of crude oil (equivalent to 45 billion yen) in grant aid to help us recover from the 3.11 Major Earthquake in East Japan.

For Japan which is lacking in oil resources, promoting the independently developed crude oil has been the crucial national policy since after the World War Ⅱ．For the Kuwaiti people, it might have been a heavy bet to conclude contracts with the Japanese people almost unknown to them. But the first trail drilling of the undersea oil field at the offshore of Khafji was miraculously successful, which solved all the difficult problems both countries had. This year, after fifty years since we were blessed with a really happy start, we would like to sail on the sea of new good fortune in the future.

Oil drillings in the Middle East hit their strides after the World WarⅡ．As you know well, the Adventures of Sinbad of the Arabian Nights was filmed and it created a big boom. In fact, there was the success in the oil developing business behind the scene.

The Arabian Nights were compiled at the end of the eighth century at the golden age of the Abassid Dynasty. Baghdad in those days was the center of the great Eurasian commercial area with the main routes of the Silk Road. Merchant ships eager to obtain silk sailed on the Silk Road water routes and reached China. Dhows in those days were famous as traditional wooden sailing ships in the Islamic world－they were called Muslim ships－and were used in the Arabian Peninsula, India and East African inshore. The Silk Road land routes were repeatedly interrupted by wars and the policies of empires, but the Silk Road water routes remained relatively unchanged and kept on developing. During the age of the Ottoman Empire, Iraq was completely ruled by it. Compared with Basra (in Iraq) which was highly urbanized, the Empire paid less attention to Kuwait which is situated farther from it.

Nevertheless, Kuwait then was an important land route between Mesopotamia in the north and the Arabian Peninsula in the south, and the Kuwait Bay commanding the view of Failaka Island was an important trading place in the Persian Bay. Moreover, it is true that Kuwait then occupied the important trading position enjoying more liberty and easier trading activities under the Ottoman’s rule.

Supported by such a geopolitical background, Kuwait developed the method of construction and the navigation of the Dhow and came to play an important role in the maritime trade. Kuwaitis (then called Al-Qrain) began to enter into fishery and trade and laid the foundation of the Arabian Maritime Era.

Taking the advantage of this foundation, the Al-Sabah Family of the Utbi Clan, who immigrated to Kuwait in the eighteenth century, fostered a more just, fair and safe trading environment. As a result, at the end of the eighteenth century, in the regions of north-west coast of India as well as Arabian Gulf, Kuwait surpassed Muscat (present Bahrain) and soon became even a rival of Basra.

Kuwaiti merchant ships in the 1860’s rose above those of Bahrain and became largest in the scale in the Gulf region. English explorer William wrote, “Kuwait is the most active port among the ports of the Persian Bay.” Kuwaiti maritime trade had been proud of its history and tradition of about three centuries, until oil industry replaced it in 1940.

Today, at the starting stage of proceeding to the Third Millennium, it is not a sudden action for Kuwait to have put up the target to pursue “the Growth and Development as a Trading Center of the World”. Kuwait is determined to achieve another great stride as a land and sea trading nation, by constructing a network on the trading routes of the desert and the sea.