From the Autumn Issue of the electronic Salaam Quarterly Bulletin, No.19, August 2016

Saudi Arabia’s King Salman bin Abdulaziz Al Saud made his first official visit to Egypt after his inauguration on April 7. He met Egyptian President Abdel Fattah al-Sisi and agreed to build a bridge over the Red Sea to link two countries on April 8. The bridge to connect the Asian continent and the African continent is expected to increase intercontinental trades and contribute to political unity of the region. 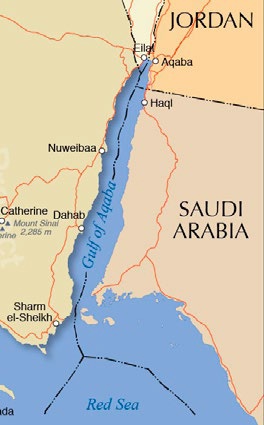 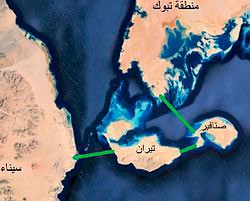 The route of the bridge to be constructed 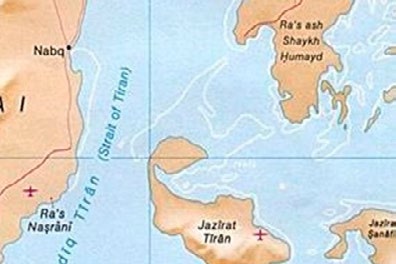 President al-Sisi is proposing to name the bridge as “King Salman bin Abdulaziz Bridge.” The bridge to be constructed extends 50 kilometers over the Red Sea from Ras El-Sheikh Hamid in northern Saudi Arabia to Ras Nasrani in Egypt near prominent Egyptian resort, Sharm El-Sheikh. (In comparison, the total length of the Seto Long-Bridge composed of a series of six bridges is 12 kilometers.) The bridge will be built near Tiran Island and Sanafir Island which are strategic points at the entrance of the Gulf of Aqaba. 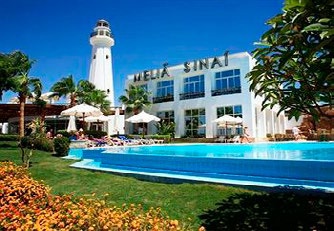 A hotel located in Ras Nasrani, the Egyptian end of the bridge

Since the bridge connects two continents of Asia and Africa, not only bilateral trades but also intercontinental trades are expected to expand dramatically.Saudi Arabia and Egypt agreed to promoteinvestment in 17 projects in education and energy including construction of power generation plants among others. Construction of schools, residential housing and power generation plants is planned in southern Sinai around the Egyptian end of the bridge. It is expected to stimulate economic activities in the vicinity and surrounding countries.

Because the construction cost of the bridge is to be entirely funded by Saudi Arabia, the recent Saudi king’s visit to Egypt brought extraordinary benefit to Egypt.

Heartily welcomed by the Egyptian government 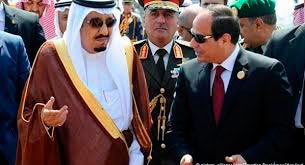 The Egyptian government heartily welcomed the Saudi king and provided various considerations for him.The king was given an opportunity to address to the National Assembly of Egypt by a special invitation. His speech at the National Assembly was the first such speech by an Arab world leader. The king in his 6-minute speech appealed for bilateral unity, unity of Arab, Islamic world and promotion of alliance. He also urged unity of actions on the Palestinian issue. 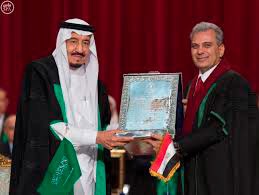 He proposed that Saudi Arabia and Egypt make join efforts to fight terrorism. He emphasized needs to defeat terrorism financially, militarily and ideologically. He further urged enhancement of the Joint Arab Force. Of course, he explained about the construction of the bridge over the Red Sea. The University of Cairo granted him an honorary doctorate at the National Assembly. 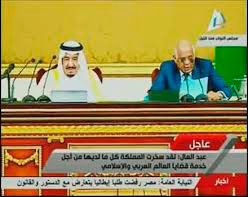 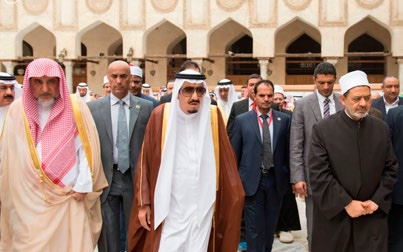 There appear to be political calculation on the part of each government behind Saudi Arabia’s extraordinary economic support to Egypt and Egypt’s considerations for the Saudi king.

The biggest political purpose of Saudi Arabia is a smooth return of Tiran Island and Sanafir Island. Saudi Arabia appears to be trying to get Egypt’s al-Sisi regime involved in anti-Iran encirclement. 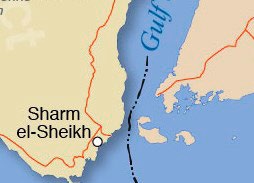 Strategically important Tilan and Sanafir islands, located at the entrance of Gulf of Aqaba (from Sinai peninsula to Northern Saudi Arabia)

Egyptian national television reported on April 7 that both countries’ representatives held a session of maritimeborder demarcation committee at the Abdeen Palace in Cairo and agreed that Tiran Island is historically a territory of Saudi Arabia which was leased to Egypt in 1950.

In the Egyptian government view, the two islands belong to Saudi Arabia, and they were entrusted to Egypt by Saudi Arabia to protect them from Israel in 1950; They were subsequently occupied by Israel during 1956 Suez War and 1967 Third Middle East War, but were returned to Egypt by 1979 peace treaty. Therefore, if Saudi Arabia requests return of the islands, Egypt thinks it is natural to return them.

Currently, only soldiers of Egyptian military and the US-led multilateral forces (stationed in the Sinai Peninsula to sustain ceasefire after conclusion of the peace treaty between Egypt and Israel) are on those islands.

The declaration of the establishment of the Islamic State as a nation was taken most seriously by the United States. This is because the United States was a nation which got involved in Middle East most deeply through the Gulf War in 1991, the Oslo peace accords in September, 1993 and the Iraq War in March, 2003.

Tiran Island is rich with corals and tropical fish and famous for snorkeling. Cruise ships are operated from Sharm El-Sheikh and the island has been administratively controlled by Egypt. Because of this, a protest movement to oppose to the return emerged in response to the Egyptian government’s announcement.

On April 15, a few dozen members of the journalist association in downtown Cairo shouted “Egyptian ownership”of the islands with banners. Social media network criticized President al-Sisi, saying “We are not convinced by the president’s comments.” Participants in the protest demonstrations increased to about 1,000 in total, making the protest the largest since the start of al-Sisi government.The police arrested 59 individuals as the organizers of the April 18 demonstration. Those arrested included members of the April 6 Movement and Muslim Brotherhood-related Islamic groups, prominent human rights activists and lawyers. The Muslim Brotherhood regarded the protest as the best opportunity to expand the movement to bring down the government.

On April 24, President al-Sisi called the group which planned and carried out the demonstrations a “force of evil” and urged people to protect the country and system from the group. He also stressed that the stability of Egypt, the most populous country in the Arab word, is most important to the stability of the Arab world. On April 29, He stated that there is nothing to hide regarding the return of the two islands.