From the Spring issue of the electronic Salaam Quarterly Bulletin, No.13, February 2015

The Arab Spring movement which aimed at defeat of longtime dictatorships and establishment of democracy has so far not been able to achieve its original aims. It brought about excesses of the Muslim Brotherhood and emergence of the Islamic State. The limitation of the movement is becoming apparent.

Current status of the Arab Spring 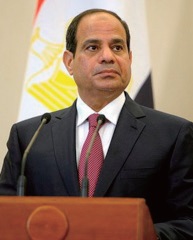 The storm of the Arab Spring caused collapse of longtime dictatorships in Tunisia, Egypt, Libya and Yemen, but democracy has been realized in Tunisia only among those countries. Egypt was sidetracked due to establishment of Muslim Brotherhood-affiliated regime which caused economic chaos and stagnation, worsening security situation and delay of democratization. Egypt went through the second revolution which established el-Sisi regime and is still on the way to democratization.

Libya and Yemen are in civil war caused by tribal conflicts and religious sectarian confrontation, and there is no prospect for democracy in near future in those countries. In Syria, the struggle to defeat the longtime dictatorship is stagnant and democracy is still a distant dream. Among kingdoms and emirates, majority Shiites demanded democratization in Bahrain in 2011 but they were continuously suppressed. In Jordan, the Muslim Brotherhood took advantage of the Arab Spring and is trying to seize every opportunity to reduce the king’s power and establish parliamentary system.

Mohamed Anwar el-Sadat, chairman of the Reform and Development Party and nephew of assassinated late-Egyptian President Anwar Sadat, explains the current situation, saying, “Tunisia and Egypt will succeed in democratization, but it will take much longer in other countries.” He expresses his view that the Arab Spring as the whole faces difficult situation.

Who took advantage of the Arab Spring and caused the movement to face difficulties? After all, the culprits are the Muslim Brotherhood and Islamic extremist groups including Al Qaeda and the Islamic State which are obsessed with Islamic law (sharia) and aim at establishment of an Islamic state rather than a democratic state.

Beji Caid Essebsi who won the presidential election in Tunisia.

After longtime President Zine El Abidine Ben Ali stepped down, elections to a Constituent Assembly were held in October, 2011, and the Ennahda Movement affiliated with the Muslim Brotherhood emerged as the leading party. In December, 2011, Moncef Marzouki was elected interim president with support from the Brotherhood and a Muslim Brotherhood regime was established. After February, 2013, opposition political leaders who stood against the rule of the Brotherhood and demanded true democratization were assassinated one after another, In the wake of those assassinations, criticism against the Ennahda Movement which let assassinations go unchecked increased, and the prime minister stepped down and a new cabinet composed of technocrats was established. The presidential election was held to take inventory of the Arab Spring in December, 2014 and Beji Caid Essebsi, former Prime Minister and a secular politician, was elected president by defeating Marzouki supported by the Ennahda.

There are three major policies promoted by the Egyptian government under President el-Sisi as the second revolution for democracy. The first policy is to establish strong political system based on the recognition that a strong state is vital. This recognition is based on the lesson learned that a weak state caused expansion of Islamic forces and chaos in Syria, Iraq, Libya and Yemen.

In response to a question about the best protection against the Islamic State, Mohammed Fayez, research fellow of the Al-Ahram Center for Political and Strategic Studies (ACPSS) answered, “It is for Egypt to become a strong state.” He indicated that Egypt is currently aiming at establishment of a “strong state” through unity of the military, police and the people.

The second policy is reconstruction of the economy which supports a strong state. Then-President Mohamed Morsi affiliated with the Muslim Brotherhood gave blind support to the Islamic extremist group Hamas in Palestine whose origin was the Brotherhood, causing security chaos and catastrophic damage to the economy in Egypt. In order to reconstruct the economy, it is necessary to control extremists including the Muslim Brotherhood, eliminate uncertainty of security, and promote tourism.

Drilling operations underway for construction of the second Suez Canal. Multiple heavy equipment and vessels are mobilized.
The second Suez Canal starts from the spot captured by this photo.=Photo by Ryutaro Minami on January 14, 2015

Another focus of the economic revitalization is construction of the second Suez Canal.

President el-Sisi proclaimed his plan to construct the second Suez Canal on the day of 58th anniversary of nationalization of Suez Canal by then-President Gamal Abdel Nasser. The plan is to create a new bidirectional canal in parallel to the existing canal, making the waiting time for passage through the canal much shorter and double the volume of vessels it can handle. For financing 4 billion US dollars to construct the 72-km canal, Suez Canal investment securities were sold with 5-year maturity and 12% annual interest rate. The entire cost is funded by the people of Egypt.

The people of Egypt were excited and the securities were sold out quickly. The military is directing and supervising the entire construction and the whole country is mobilized for the project. The construction started in August last year and the canal is to be completed in coming August.

The third policy which is more essential is implementation of Islamic religious reformation. President el-Sisi held a meeting with Mohamed Mokhtar Gomaa, the Minister of Religious Endowments on October 28, 2014, and emphasized the importance of reinterpretation of Islam in light of recent development of Arab countries and the world. Abdurrahman Wahid, former president of Indonesia, said, “Literal interpretation of the Koran generally leads to so-called Islamic fanaticism” and pointed out that the Koran itself tends to encourage violent extremism. President el-Sisi had excesses committed by Islamic extremist groups including the Muslim Brotherhood which interpret the Koran to justify their position and violence in his mind when he emphasized the necessity of modern interpretation of Islam. 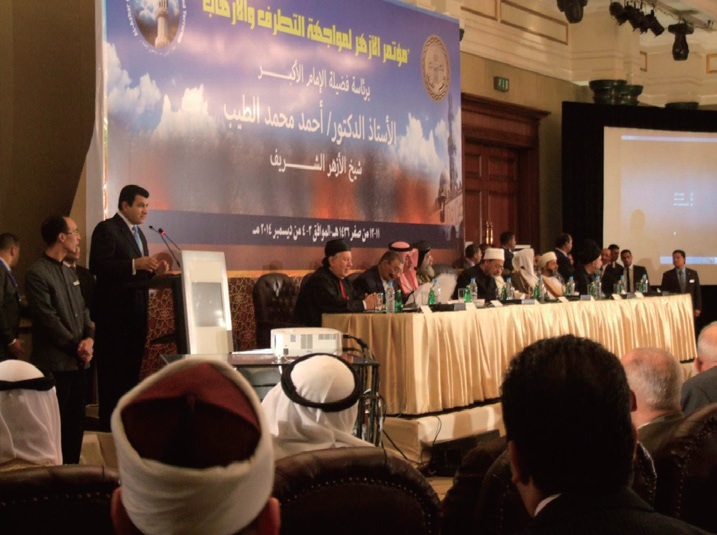 Al-Azhar Grand Imam Mohamed Ahmed el-Tayeb and other leaders sit on the platform in the opening ceremony of Al-Azhar International Conference held at a hotel in Cairo.
Photo by Ryutaro Minami taken at the conference venue on December 3, 2014

Al-Azhar has been requested by Christian churches including the Roman Catholic churches to take a stand toward Islamic extremist groups including the Islamic State. Al-Azhar was strongly encouraged by President el-Sisi to take a stand and changed indecisive attitude it heretofore took 180 degrees. Al-Azhar recognized its responsibility to educate Sunni extremists and made determination to reeducate all Muslims. 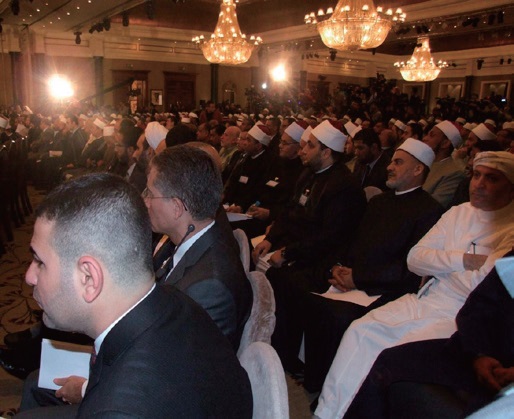 Sunni religious leaders from different countries who attended the opening ceremony of Al-Azhar International Conference held at a hotel in Cairo
Photo by Ryutaro Minami taken at the conference venue on December 3, 2014

On December 3 and 4, Al-Azhar International Conference was held in Cairo and Al-Azhar’s determination and appeal for the unity of Sunni leaders were proclaimed to the world at the conference. Mohamed Ahmed el-Tayeb, the Grand Imam of Al-Azhar which is the highest authority of the Sunni (which gave birth to Islamic extremist groups) stated in his opening remarks, “We must not close our eyes and we have to take responsibility for the youth who misunderstand and join the extremists. They misunderstand the meaning of jihad.” He emphasized that “Islamic leaders have responsibility to give correct guidance” on verses of the Koran, the holy scripture of Islam.

This proclamation represented a fundamental turnaround from previous evasion of responsibility on the part of Al-Azhar which continued saying “Extremists are not Muslims.” With this, Al-Azhar for the first time made clear about its full responsibility for education of all Muslims. Al-Azhar recognized responsibility of Sunni religious leaders for emergence of the Islamic State and pledged fundamental reform of education of Islamic leaders and followers.

The Washington Times reported in its January 12, 2015 issue, “On Dec. 28, Mr el-Sisi, a former chief of the armed forces who ousted the elected Islamist president in 2013, went to Cairo’s Al-Azhar University, a leading intellectual center of Sunni Muslim thought. He stood before clerics and scholars and asserted that years of Islamic writings and sermons had created an ideology that justifies waves of violence. Now, he said, the imams have a duty to stop it. ‘You must emerge from it and look from outside, in order to get closer to a truly enlightened ideology,’ he said in a speech televised to the Egyptian people. ‘You must oppose it with resolve. Let me say it again. We need to revolutionize our religion.’”

The Washington Times compared el-Sisi’s statements with other world leaders’ statements: “Mr. Obama asserts repeatedly that al Qaeda-type killers have nothing to do with Islam, the religion. At the same university and same audience makeup in 2009, Mr. Obama said, ‘Islam is not part of the problem in combatting violent extremism. It is an important part of promoting peace.’”; “He (French President Francois Hollande) told citizens, ‘Those who carried out these attacks, the terrorists, the madmen, these fanatics have nothing to do with the Muslim religion.’” Thus the newspaper highly evaluated points made by el-Sisi.

Potentials of the Arab Spring in Egypt

President el-Sisi visited a Coptic church and celebrated Christmas on January 7. The previously, an aide to the president was dispatched to such event. But this time, the president himself attended the event in demonstration of his interfaith posture.