Merits and demerits of the US-Iraq War

From the electronic “Salaam Qurterly Bulletin” No.6, May 2013.
Washington   Hideaki Kubota

US President Barack Obama declared the end of Iraq War on December 14, 2011 and the withdrawal of the US troops from Iraq was completed on December 19, 2011. President Obama aims at total withdrawal of the US troops from Afghanistan by the end of 2014 and is reducing the troops there steadily. With this, the US military intervention in Afghanistan and Iraq started by Bush administration will come to a close. But, whether Afghan and Iraqi questions are going to be solved is another question. 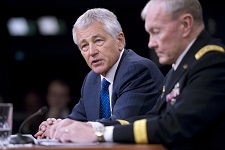 Secretary of Defense Chuck Hagel and Chairman of the Joint Chiefs of Staff Gen. Martin E. Dempsey brief the press on President Obama’s budget request for the 2014 fiscal year as well as the continuing effects of sequestration on the defense budget in the Pentagon on April 10, 2013. DoD photo by Erin A. Kirk-Cuomo

US troop withdrawal decided on political level
The United States and Iraq came to an agreement on US troop withdrawal by the end of 2011 based on political considerations in 2008. The United States was eager to reduce burden on manpower and economy caused by the war, and Iraq was eager to impress its own people about an imminent end to US control of Iraq. The troop withdrawal schedule was decided mainly based on US and Iraqi domestic political interests. The important question of whether Iraqi security forces are capable of maintaining security on their own was secondary. The capability of Iraqi security forces has not been proven and violence including terrorist bombings with civilian casualties continues today. Regional Al-Qaeda affiliate, the Al-Qaeda of Iraq (AQI) continues violent attacks against Iraqi government, and it has also been involved in the civil war in the neighboring Syria for past two years. AQI maintains close connections with the al Nusrah Front, one of armed insurgency groups in Syria. (to be continued into the electronic “Salaam Quarterly Bulletin” No.6)

Full article available in the electronic “Salaam Quarterly Bulletin”, No.6, May 2013.