Warfare in the New Era: Digital Strategies as Deterrence Enhancement

From the Summer Issue of the electronic “Salaam Quarterly Bulletin”, No.41, May 2022

The war in Ukraine, which began with the invasion of Ukraine by Russian forces on February 24, has taken a turn that defies common senses in conventional warfare. It was thought that the invasion by Russian forces would be settled in a manner that overwhelmingly favors the Russian side. The scenario envisioned was that the Russians would jam Ukrainian air bases and other targets, launch missiles and launch a blitzkrieg before the Ukrainian military could get ready. This scenario seemed to work, but as Ukrainian President Volodymyr Zelensky remained in the Ukrainian capital of Kyiv and began to call for an all-out war using social networking services, the Russian military gradually began to lose its grip on the battleground.

President Zelensky did not leave the country

In most previous wars, the common practice has been for the head of state class to leave the country or seek refuge in a safe place within the country to assume command of the country or establish a government in exile to fight the war of resistance.

It was also standard practice for the aggressor to seize and stop the functioning of television stations to make it easier to control the people of the other country before advancing militarily on them. It is believed that the Russian military invaded Ukraine in line with this standard strategy.
However, a miscalculation occurred. President Zelensky did not leave the country, nor did he evacuate to a safe location within the country. Moreover, a video that was taken in the capital Kyiv was posted on Facebook, calling for solidarity and resistance from the Ukrainian people, saying, “We are here, we will defend our independence.”
In Japan, some pundits repeatedly said that the president should not call on the people to fight the war of resistance. They said, “If the president were to be in the capital and call for a thorough resistance war, many of the people would inevitably die, so he shouldn’t do it.” They also expressed concern that if the president were detained, it would affect future negotiations. Others pointed to the external and diplomatic failures of President Zelensky.
However, a video of President Zelensky declaring “I am here” was broadcast around the world, quashing the speculation that he would go into exile. The Ukrainian presidential administration then used social networking services (SNS) to call on the Ukrainian people to “fight to the bitter end,” and the Ukrainian people responded. The response was overwhelmingly positive. President Zelensky’s approval ratings jumped to over 80%, significantly altering the situation of the battle. 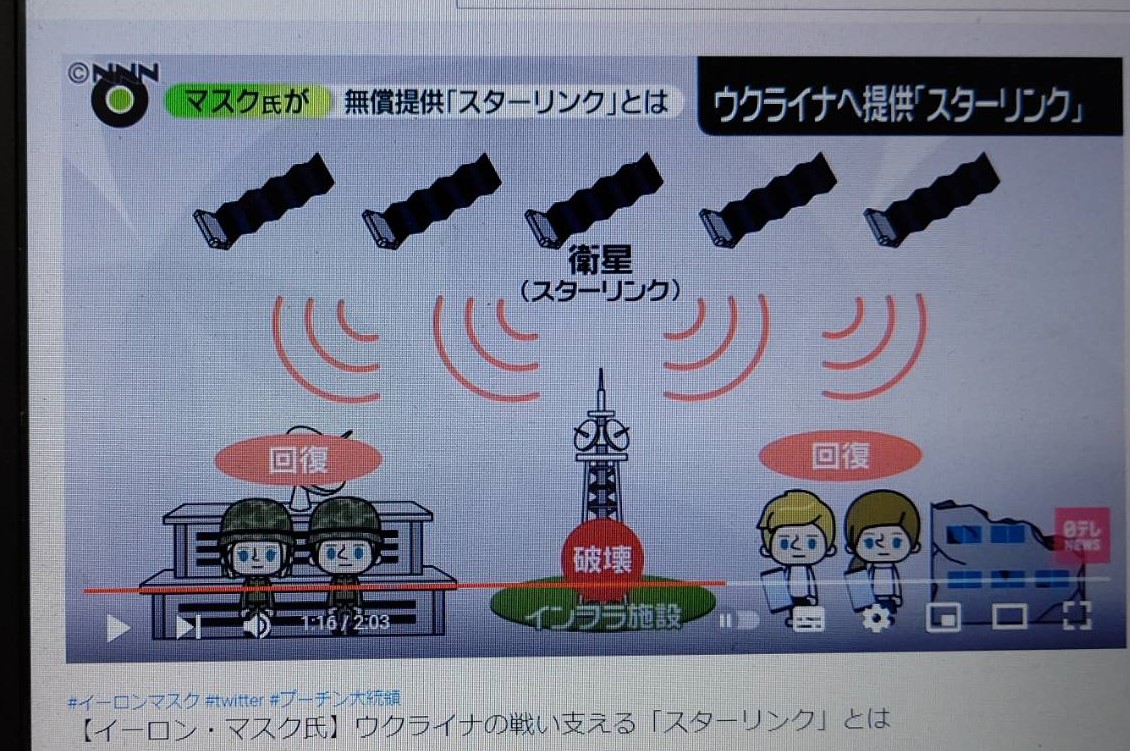 Even if terrestrial communications infrastructure is destroyed, social networking is restored through satellite communications provided by Elon Musk.
Starlink is implementing a business that provides high-speed Internet access to anywhere in the world from space at an altitude of 550 km.
Mr. Mykhailo Fedorov, Deputy Prime Minister of Ukraine (who also serves as Minister of Digital Technology appealed to Elon Musk to provide Starlink and he complied, and 10 hours later, it was provided free of charge to Ukraine.

In addition, many citizens continued using digital devices, namely smartphones, to transmit the image of the devastation of the city in which they live to the rest of the country and abroad through social networking services. The role of the local journalists was taken over by the people through their smartphones, and each individual continued to transmit the news to the world as a news photographer.
Immediately after the invasion, the Ukrainian people generated their images aggressively, which at once drew support from the international community. With the cooperation of NATO countries including arms support, the Russian invasion was stalled.
Russian President Vladimir Putin and other Russian government agencies continued to deny the information about the reality, saying it was “fake (false) information,” Furthermore, Russia hijacked the social networking accounts of ordinary people by cyber attacks, and circulated fake videos on the Internet which claims that “Russians were attacked by Ukrainian forces.” In such an information war, the Ukrainian side’s videos became evidence, and the information that Russia provided was exposed as fake, giving the Ukrainian side the upper hand. Of course, there are signs of “fakes” in the Ukrainian video as well, so it cannot be said that the Ukrainian side is entirely correct, but it is clear that the Russian side has been put at a disadvantage.
Meanwhile, in Russia, Apple, Google, and South Korea’s Samsung have already halted smartphone sales due to the Russian government’s thorough repression of people and forces that criticize the government.

Above image by ABEMA TIMES

In addition, engineers among Ukrainian citizens who are skilled in digital technology are participating the war as hackers and cooperating with the government by launching cyber warfare attacks against Russian state-run broadcasters, newspapers, and even military facilities. They are also using drones to inform the Ukrainian government of the Russian invasion routes, and the entire population is using digital technology to compensate for the country’s military inferiority to the Russian army. 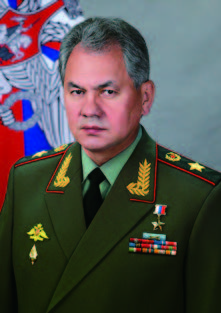 Russian Defense Minister Sergei Shoigu, from Wikipedia
Since the Vietnam War, only one officer has lost his life in the U.S. military, but since the invasion of Ukraine, five or six officers have already lost their lives in the Russian military.
(From Newsweek (Japanese and electronic edition) March 23) 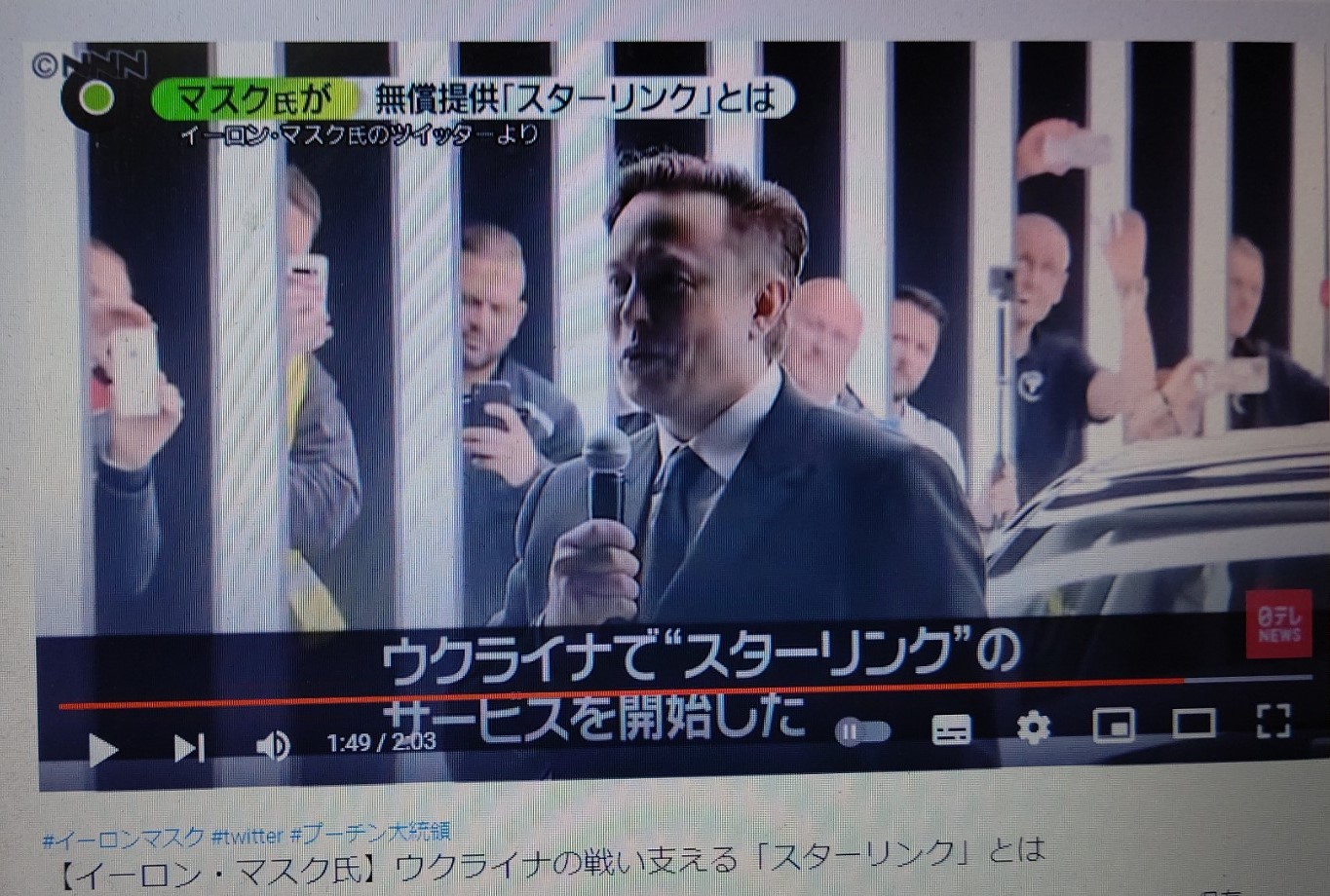 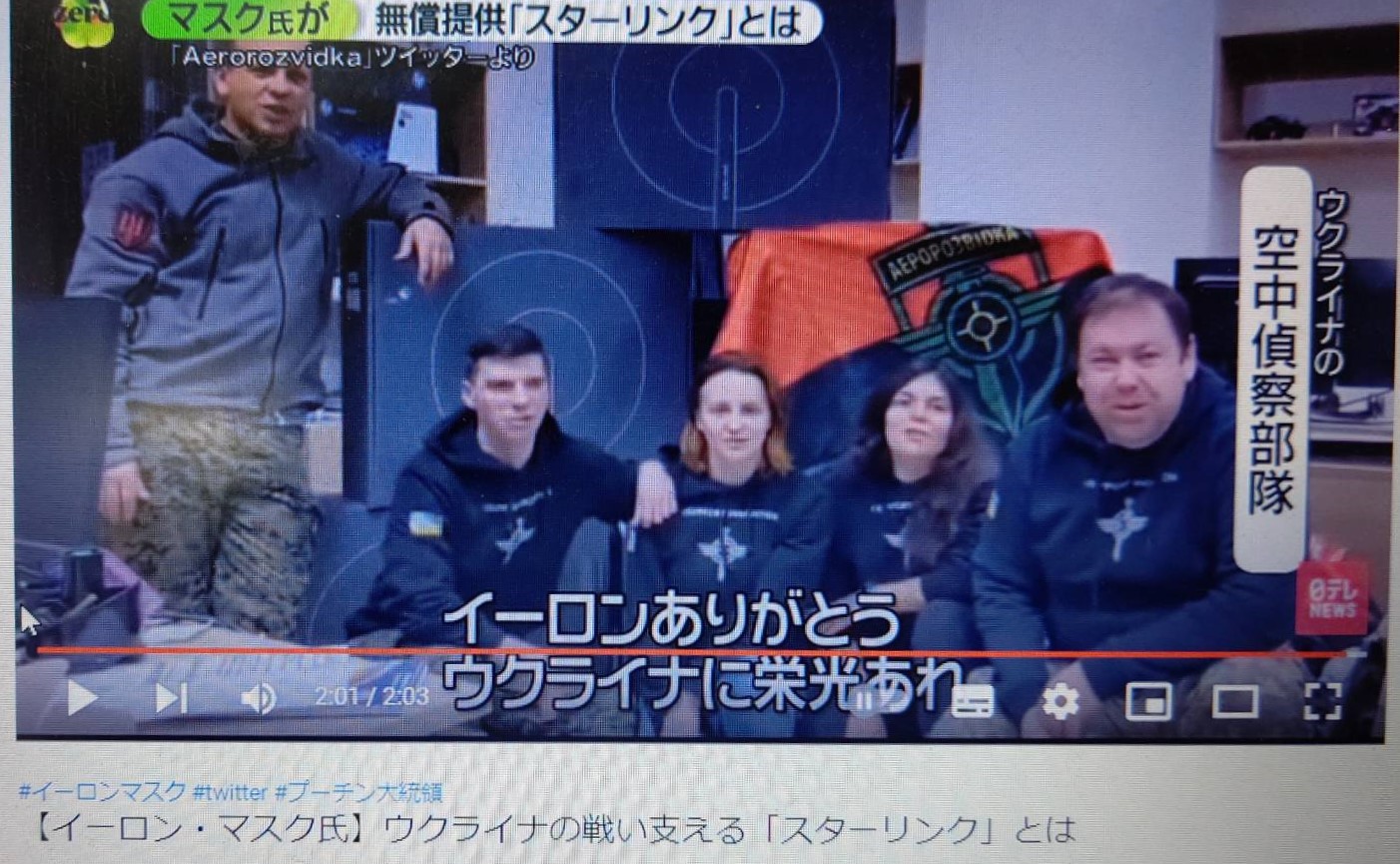 This is said to be made possible by Starlink (SpaceX, USA), a high-speed Internet service that uses a satellite system. The service was provided to Ukraine free of charge by Elon Musk, CEO of the U.S. electric car giant Tesla, who has also branched out into the space business.
Starlink is what is known as a high-speed satellite Internet service.
This system was provided free of charge in response to a request from the Ukrainian government. Currently, small satellites (100-500 kg in mass) are placed in low orbit at an altitude of approximately 550 km. The system is composed of more than 1,600 satellites enabling communication with dedicated transmitters and receivers on the ground. This technology has been applied not only to regular Internet services but also to drones. Those drones are used to monitor the Russian military and pose a threat to the Russian side.
As of September 2021, the beta service is available in 17 countries. Preparations are underway to make it available in Japan this year. And now, Ukraine has joined the list, albeit in an emergency situation. Even if terrestrial lines become unavailable, the use of satellite lines serves as a backup. This is a great weapon for Ukraine. Incidentally, it can be operational in Japan as well this year.
Starlink itself is said to enable guerrilla warfare by the Ukrainian military, as the system is impervious to interference from Russia. Enabling Ukraine to know the movements of the Russian army in advance has created a situation in which “a small band of soldiers conquers a great army.”
However, what makes this possible is the strong sense among the Ukrainian people that they love their country Ukraine and are willing to risk their lives to “defend it.”

Possibility of Offensive Defense Measures by the Net 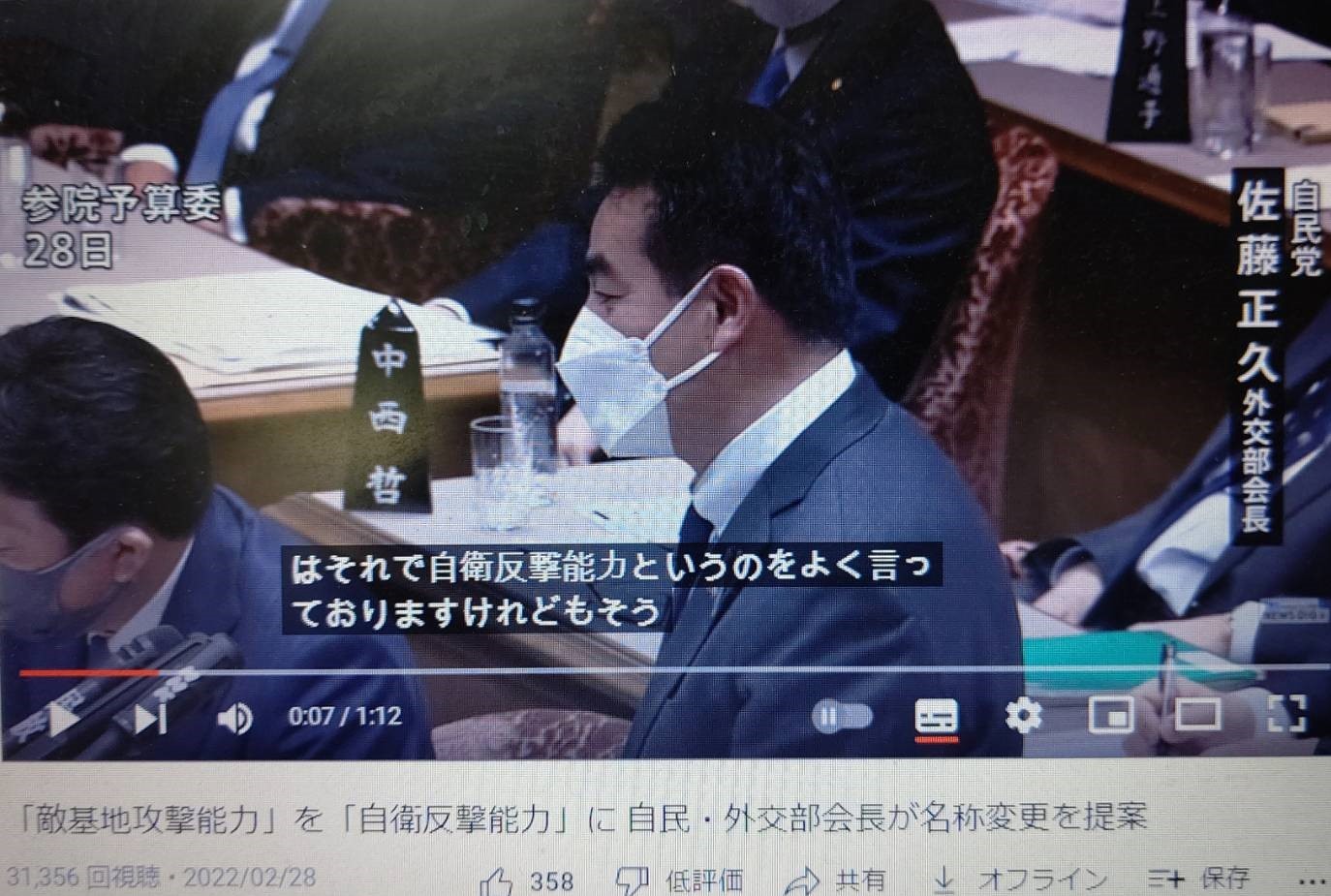 Don’t let them hit you before you hit them. The wave of digitalization is sweeping through the military as well. Weapons equipped with digital and AI technology are being developed, such as computer-controlled missile launches and automatic control devices to target objects.
In the war in Ukraine, the Ukrainian side has succeeded in stopping the Russian army’s advance in the form of self-defense by using social networking services and the latest digital technology. On the other hand, it can also be said that the use of digital technology has shown that offensive defense measures are also possible.
For example, if a country is seen to be launching missiles or has launched missiles at another country, the target country can infiltrate the system that controls its control equipment and cause it to self-destruct or lose control by introducing a computer virus or by taking over the system. If necessary, the country can defend itself by launching the hijacked missiles at the launching base and destroying it.
It is a cyber-defense that does not involve live weapons. The war in Ukraine has shown us the possibilities of a way of defense that does not involve missiles or fighter jets.
If it is difficult to develop or purchase weapons, another method is to train personnel through system development.
Israel is focusing on strengthening these defense systems. Land, Sea, Air, Space, and Digital. It is committed to strengthening the digital sector by treating it as a fifth army.
However, when it comes to cyber defense, if the other party also has highly skilled technicians, the two parties may repeatedly take over and be taken over by each other, so it is necessary to train and secure excellent personnel to prepare for various situations.

Strengthening China’s Governance over the People through Digitalization

Digitization and cashlessness in all areas, solely because it is convenient, is also dangerous. In China, the shift to cashless transactions (digital payments, payments made with cards, smartphones, etc., without using money) has made the country the second most cashless nation after South Korea. However, since China is a one-party communist dictatorship, it shows a different face from democratic countries, such as imposing restrictions on commerce unless you are a member of the Communist Party. 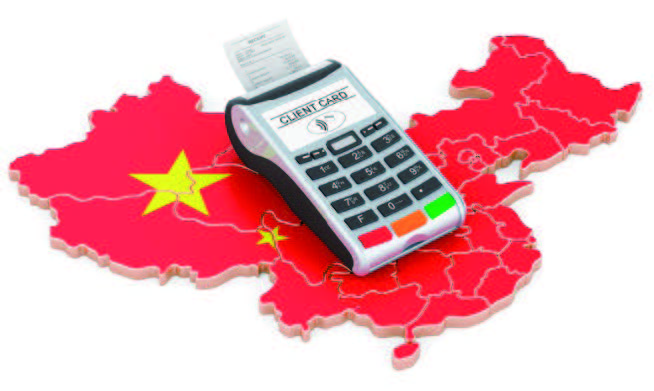 Unlike in Japan, credit cards are not widely used. Have you ever seen the mark “ Ginren/UnionPay” in department stores or electronics retailers in Japan? In fact, this is the mark of a card issued in China. Most Ginren cards are debit cards, which means that the money is deducted from your bank account at the same time of payment. In China, where there is no credit system for individuals, credit cards are not widely used and Ginren cards are widely used. (From “Akira Ikegami’ s World Economy” introduced by Sumitomo Mitsui Trust Bank, Ltd.)

Beyond the convenience of cashless, there is the possibility of increased surveillance by state authorities. In a cashless society, people can make purchases using cards and smartphones without carrying cash. One can also use only one card for identification. However, this also means that the state can control information, especially in China, a communist country where being a member of the Communist Party is a primary concern, and the government can force companies to disclose personal information at its request. 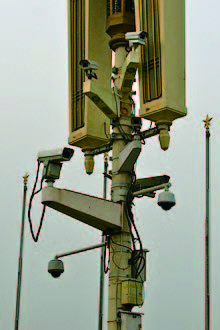 Furthermore, China is transforming itself into a state-of-the-art surveillance society using the latest technology.
For example, when a man loses something, he reports it to a Chinese police officer, asking if he could please look for it. An hour later, the police officer informs him that the lost item has been found, and when he goes to pick it up, he is told, “The lost item was found at such and such time. By the way, you went to this place at such and such time and you entered the club at such and such time, didn’t you?”
This is just one example of the horrors of China’s surveillance society. Facial recognition systems, cameras installed on the streets, and even AI-based screening are used to determine who has lost something.
It is believed that such an approach can actually be used to monitor ethnic minorities. Once the government has its eye on you, you cannot escape its scrutiny.
Some say that not only China but also the U.S. has a similar surveillance society. But the fundamental difference between China and the U.S. is that in the U.S., the freedom of the people is basically recognized, and the state does not interfere unless there is a serious problem.
This is the difference between communist societies and democratic societies.
♥ President’s column
♠ 日本語ページはこちら
♦ Write comments.
♣ Write e-mails.