From the Summer Issue of the electronic “Salaam Quarterly Bulletin”, No.41, May 2022

The withdrawal of U.S. troops from Afghanistan last year and the subsequent establishment of the Taliban interim government in 2021 gave a boost to the Islamic State (IS), an extremist organization hiding in the Middle East, and gave momentum to anti-U.S. actors, including China, which are attempting to change the status quo by force. The Abe administration, with its clear banner of proactive engagement for peace, was succeeded by the Suga administration, but the Kishida administration does not seem to have a clear banner against China. The best deterrent to China’s attempt to change the status quo by force will be for Japan to make clear its intention to overcome China’s communist strategy.

Historic Agreement between the U.S. and Taliban 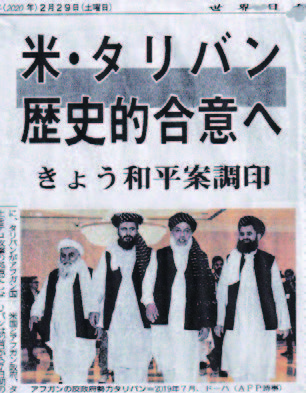 The Sekai Nippo reporting on the historic U.S.-Taliban agreement (Feb. 29, 2020)

In February 2020, the U.S. Trump administration and the insurgent Taliban signed a peace proposal in Doha, the capital of Qatar. The peace proposal was based on conditions including the phased withdrawal of U.S. troops from Afghanistan, a promise not to turn Afghanistan into a terrorist stronghold, and the Taliban coming to the negotiating table with the Afghan government. They also promised to sever ties with al-Qaeda as an undisclosed supplementary condition. Although the promise of severing ties with al-Qaeda is undisclosed, it seems to be a matter of course. This is because the U.S. invasion of Afghanistan was triggered by the Taliban regime’s harboring of Osama Bin Laden, the ringleader of al-Qaeda who carried out the 9/11 terrorist attacks. It is easy to imagine that the U.S. would demand that the Taliban sever its ties with al-Qaeda as a necessary condition for negotiation to prove that the Taliban has nothing to do with al-Qaeda. It also means that the Islamist state that the Taliban regime is aiming for has been made to promise that it will not turn Afghanistan into the kind of place that would initiate another 9/11 type terrorist attack. 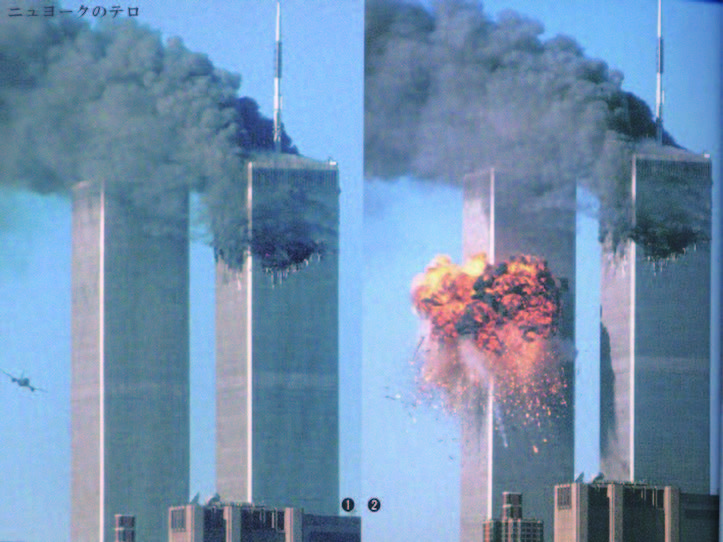 Later, the U.S. government transitioned from the Trump administration to the Biden administration, but the agreement with the Taliban was carried over. Therefore, the U.S. military did not ‘retreat’ from Afghanistan, but rather ‘withdrew’. On the other hand, the peace negotiations between the Taliban and the former Afghan government did not progress, and the Taliban’s military domination led to the creation of an interim government. Therefore, the Taliban’s responsibility is to create an inclusive government without removing the former government in a coercive and dictatorial manner. The international community is watching this closely. Can they show by their policies and actions that they are not the same as the Taliban regime of 20 years ago? It’s up to the Taliban.

Historic speech by US Secretary of State Pompeo 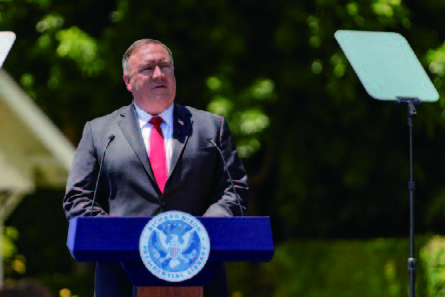 US Secretary of State Pompeo addressing at the Nixon Presidential Library in California (from Mr. Pompeo’s Twitter posts)

On July 23, 2020, then Secretary of State Pompeo delivered a speech titled “Communist China and the Future of the Free World” at the Nixon Presidential Library near Los Angeles. Mr. Pompeo prefaced his speech by saying that it would be the administration’s fourth speech on China, following a series of speeches by Assistant to the President for National Security Affairs O’Brien, Federal Bureau of Investigation Director Wray, and Attorney General Barr, and that his speech would bring them all together “to explain in detail what the Chinese threat means for the U.S. economy, for freedom, and for liberal democracy around the world.”

In 1972, President Nixon launched his engagement strategy with his historic visit to Beijing. We welcomed China. We expected a future of mutual respect and cooperation. The goal of Nixon’s engagement strategy was “to move China toward change.” He hoped that the Chinese Communist Party would respond and transform itself into a country that sought a free and safe world.

But it didn’t happen. On the contrary, the Chinese Communist Party simply took advantage of our free and open society for its own convenience. China cheated and stole our superior intellectual property and trade secrets. It took away the supply chain from the United States and distributed products made with forced labor through it. President Nixon said he was worried about creating a “Frankenstein” by opening the world to the Chinese Communist Party, and that’s exactly what happened. 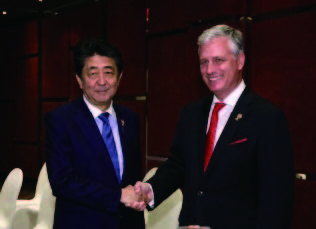 As Mr. O’Brien pointed out, we should not forget that the Chinese Communist Party regime is a Marxist-Leninist regime. General Secretary Xi Jinping is a believer in a bankrupt totalitarian ideology. He has long harbored ambitions for the communist-based hegemony of China. While the United States has ignored the fundamental ideological differences, it can no longer afford to overlook these differences.
The only way to truly transform Communist China is to deal with its leaders based on their actions, not on what they say.

The freedom-loving nations of the world should urge China to change. The actions of the Chinese government are a threat to our people and our prosperity. We must start by changing our view of the Chinese Communist Party. It cannot be treated like a normal country.

The world has witnessed major events during the Trump presidency. The military attack on Syria, the withdrawal from the Iran nuclear agreement, the collapse of the Islamic State, the US-North Korea summit, and the normalization of diplomatic relations between Israel and Arab countries. These are the results of the Trump administration’s active response. While it has been criticized for moving toward the Monroe doctrine, it has taken on critical issues that could have led to a global war and has neutralized them as if it were defusing a landmine. It was an achievement worthy of the Nobel Peace Prize.
The shift in the U.S. international strategy has been highlighted by the confrontation with China. The National Security Council meeting in April 2019 described the confrontation with China as a “clash of civilizations.” The main points of confrontation alone that were listed included trade imbalance, security strategy, the South China Sea, Taiwan, intellectual property rights, and race (e.g., the Uyghur issue). In particular, NSC called for the exclusion of Huawei’s products over the practical application of the next-generation “5G” communication standard. The ‘Japan-US trade war’ of the late 1980s pales in comparison to the current trade war. It is a confrontation that goes far beyond the dimensions of an economic war.

Earlier this week, the closure of the Chinese consulate in Houston was announced. This is because it had become a hub for espionage and intellectual property theft. (From Pompeo’s speech on July 23) Photo of the former Chinese Consulate General in Houston, taken in 2015 (from Wikipedia)

Mao Zedong of the Chinese Communist Party once said, “War is a war of bloodshed, and politics is a war without bloodshed.” In modern parlance, this is super-limited warfare. Not only military and diplomatic affairs, but also politics, economics, business, commerce, education, sports, and the arts are all under the control of the Chinese Communist Party for its strategic purposes. And mainland China is on the way to completing a platform where all its citizens can be monitored by AI and surveillance cameras. This will not only affect the Chinese within China but also the Chinese outside the country.

The Chinese government is currently building a surveillance system that can identify all 1.4 billion people in China in one second. With the deployment of surveillance cameras with facial recognition functions, it will increase the number of cameras to 626 million by the end of 2020. PRESIDENT Online 2020/06/08 (Photo: Haruo Kurasawa)

Secretary of State Pompeo’s speech sees the US-China conflict as a serious conflict that goes beyond the level of a clash of civilizations. It is not a clash between the waves of civilization spreading from China and the waves of civilization spreading from the United States, he said. In other words, the 30-year strategy of engagement with China has failed to transform China, which was the goal of the engagement strategy, and on the contrary, China has become a powerful country and Chinese totalitarianism based on communist ideology has created a strong dictatorship and looms over the United States. Communists have infiltrated the U.S. and are waging a super-limited war in all areas.
The U.S. international strategy, i.e., the “30-year strategy of engagement with China,” has been a failure. He says that the engagement strategy has failed to transform the Marxist-Leninist totalitarianism of the Chinese Communist Party.
China is not an ordinary country. The fact that China is a totalitarian country that adheres to Communist ideology. It calls for cooperation among countries that share the values of freedom, human rights, democracy, and adherence to the rule of law.

Deepening and Expanding the Japan-U.S. Alliance is a Deterrent to Communist China

It would not be an exaggeration to say that the “Free and Open Indo-Pacific Initiative” proposed by former Prime Minister Abe is a Japan-initiated strategy to overcome “deception and trap” of China’s One Belt One Road initiative. The values of Japan and the U.S. and their strategy toward China are now aligned. The Quad (Japan, U.S., Australia, and India) and the AUKUS (Australia, the U.K., and the U.S.; the trilateral military alliance was launched on September 15, 2021) will serve as a deterrent to China. International alliances that share the values of freedom, human rights, democracy, and the rule of law are beginning to expand greatly, with the deepening of the Japan-U.S. alliance at the center of the vortex.