From the Autumn Issue of the electronic “Salaam Quarterly Bulletin”, No.30, August 2019

Establishment of OPEC Plus

On July 2, OPEC agreed to establish a loose alliance “OPEC Plus” to cooperate with non-member oil producing countries such as Russia in production coordination. At the same time, they agreed to maintain coordinated production reduction which started from December 2016 until 2020.

Data based on “BP,Statistical Review of World Energy 2012” 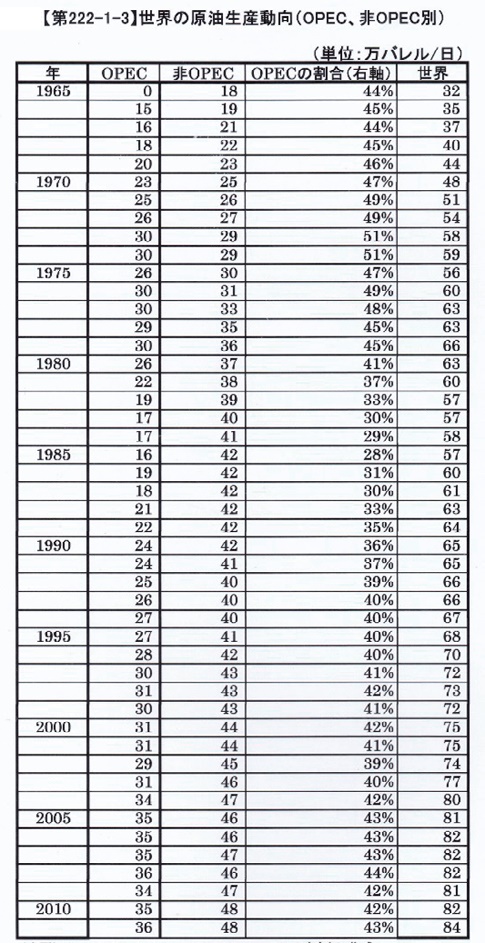 Data based on “BP,Statistical Review of World Energy 2012”

It has been pointed out that OPEC’s influence has declined for some time. The ratio of crude oil production in OPEC member countries in the world’s crude oil production has declined significantly compared to when it was established and that is the main cause. The world’s crude oil production volume has increased from 31.8 million barrels per day in 1972 to approximately 80 million barrels per day in 2018, which represents 2.5 times increase in 43 years. In that context, the production ratio of OPEC member countries fell from a little more than 50% in the 1970’s to less than 30% in the 1980’s. After that, it showed a moderate recovery, and it is about 42% in the 2010s. In particular, with the development of shale technology in the United States in recent years, the United States has become the largest oil producing country, causing a significant change of the structure of supply and demand in the world. In such a trend, the establishment of the alliance “OPEC Plus” with Russia and others can be considered inevitable in some sense. In fact, when oil prices plummeted in 2014 and 2015 (mainly due to the sharp decline in oil prices in the United States at that time), OPEC agreed to reduce production in a way that included Russia to prevent further plunge, and the price of crude oil went up. This fact shows that OPEC’s production coordination is still effective to curb crude oil price fluctuations even today. At the same time, it also shows that this is impossible without the cooperation of non-member countries such as Russia.

By the way, crude oil prices are on a moderate recovery trend recently, as seen from the sharp decline due to shale oil in 2014. However, the irregular ups and downs sometimes show a destructive aspect, with the price drastically dropping from the mid 70s dollar level at the end of last year to below $ 50 temporarily. The volatility of the crude oil price is large compared to other commodities. I would like to give an overview of the situation of each country that affects the price of crude oil. 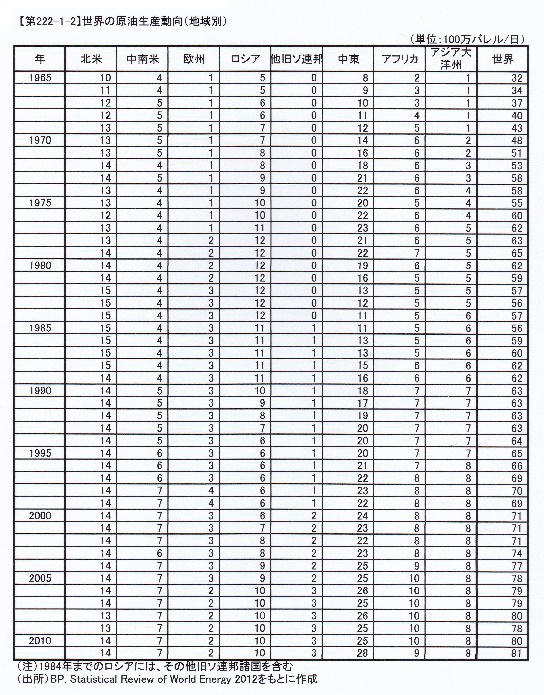 Russia is in a very severe economic situation due to sanctions imposed by Western countries triggered by the Ukraine issue. Russia is the world’s third largest producer of crude oil, and crude oil prices have a major impact on Russia’s economy. Therefore, supporting crude oil prices through coordinated production reduction with OPEC is really meaningful for Russia. However, the value of Russia’s currency ruble has fallen sharply due the sanctions by the US and Europe, and the crude oil price in ruble is currently at the highest level. From the perspective of Russia’s domestic economy, controlling inflation is a major issue, and further increase in crude oil prices are not necessarily desirable. This time, an option was considered to postpone the agreement to reduce production and change the direction toward production increase. However, President Putin, who wants to show his country’s presence as a former superpower, is trying to increase his voice over all international issues and some observers think that, in opposition to the United States, he chose to cooperate with OPEC this time.

Saudi Arabia is the largest oil producer in OPEC, and the second largest producer in the world. It is the leader of OPEC and has a great influence. Last year, the assassination of Saudi Arabian journalist Jamal Khashoggi incited voices of great suspicion and criticism from the international community. On the other hand, its relationship with the United States has been good, and the inauguration of President Trump marked a honeymoon period in the relationship. Saudi Arabia purchased a large amount of weapons from the United States. President Trump also shows his stance to defend Saudi Arabia in the case of Khashoggi assassination.

Last year, as crude oil prices increased moderately, President Trump stated on Twitter that “Crude oil prices are too high” and “I would like to see more production from OPEC”. Saudi Arabia responded saying, it is “prepared to fill in the gap created by the reduction in production due to the Iranian crude oil embargo,” and subsequently the price of crude oil plunged. Although there was a view that the United States and Saudi Arabia might have had a secret deal of increased production in exchange for closing eyes on the Khashoggi assassination case, such a view remains to be mere speculation. In any case, Saudi Arabia has a large role as the leader in OPEC.

Iran’s crude oil output is the sixth in the world. In 2015, Iran concluded a nuclear agreement with the United States, Britain, Germany, China and Russia, and the economic sanctions that had been in place until then were lifted. However, with arrival of the Trump administration, the United States declared that it would withdraw from the nuclear agreement with Iran despite the criticism and persuasion of other countries, claiming that the nuclear agreement established under the Obama administration was inadequate. The original sanctions by the United States, mainly an embargo of crude oil from Iran, were reinstated and thet obligated allies such as Japan to comply with it. It was planned to be implemented from November last year, but it was decided to exempt Japan and other countries for half a year. The exemption contributed to the sharp drop in crude oil prices. Exemption measures have been abolished from May this year, which has been a factor in rising crude oil prices. The tension between the United States and Iran has been rapidly intensifying, with the recent incident of shooting down of the US reconnaissance UAV, which is a cause of disturbance. Japan was also reminded of the importance of stability in the Middle East region in term of energy security through the attack on Japanese oil tankers in the Strait of Holmes. Crude oil prices are expected to surge in the event of a military clash between the United States and Iran.

The production cost of shale oil is initially estimated to be about $ 50 to $ 60 a barrel, and if crude oil prices rise above that level, shale oil production is expected to increase, which has the effect of suppressing the rise in crude oil prices. On the other hand, if the production of shale oil is increased even if the production of OPEC is reduced, the effect of the production reduction will be limited and it contributes to the decrease of the influence of OPEC. Even though the United States is an exporter of crude oil, President Trump hopes for a decline in crude oil prices, and his posting on Twitter has the impact of causing crude oil prices to plummet. Much of this is considered to be part of his election strategies. Oil prices are directly linked to people’s lives, and rising oil prices are considered to be a factor that works against re-election. In addition, the US-China trade war, initiated by President Trump, is a major concern in the current global economy. The impact of the trade war between the world’s top and second largest economies on the world economy is enormous, and overheating of the trade war will slow down the world economy significantly. The slowdown in the economy is a cause of the decline in crude oil prices due to the decrease in demand for crude oil.

It goes without saying that crude oil is an essential commodity in modern society as energy, but there are other aspects to crude oil. In other words, crude oil prices have been incorporated into modern complex financial markets as a financial product. Hedge funds, etc., invest in huge amounts of money in crude oil, and crude oil prices are affected not only by crude oil supply and demand, but also by interest rates and stock prices. It has been confirmed that prices sometimes move in correlation with them in a very diverse manner. In addition, government-affiliated hedge funds such as Saudi Arabian hedge funds are investing huge amounts of oil money obtained from crude oil sales all over the world, and if the price of crude oil falls sharply, it will lead to a decline of stock prices as oil money flows back. 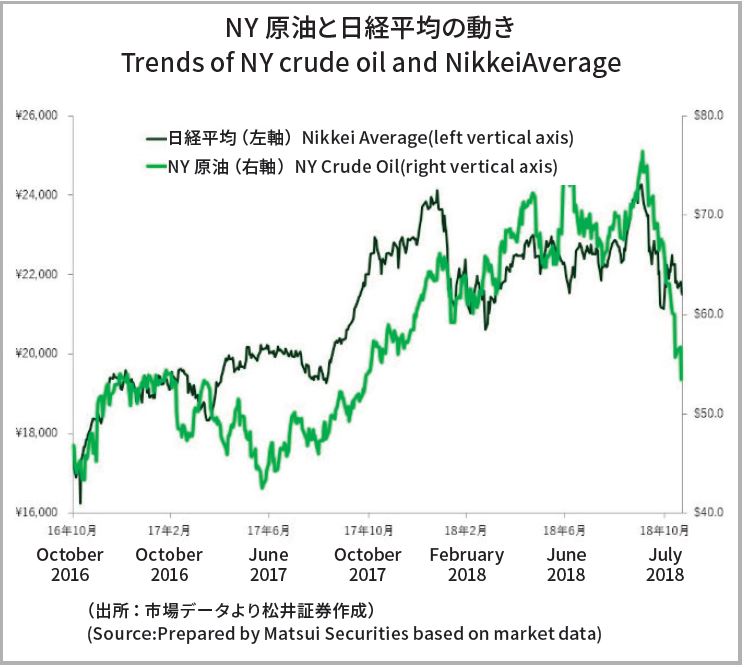 The world economy has many uncertain factors other than the US-China trade war. President Trump’s unpredictable statements and behaviors cause major impacts, and even a single word on Twitter sometimes shakes the world. This is also a big uncertainty factor. Even in the immediate past, he blatantly interfered with FRB’s monetary which has great influence on the US and global economy and mentioned possible removal of FRB chairman policy. Something like this has not been done by the president in the past.