From the Spring Issue of the electronic “Salaam Quarterly Bulletin”, No.28, February 2019 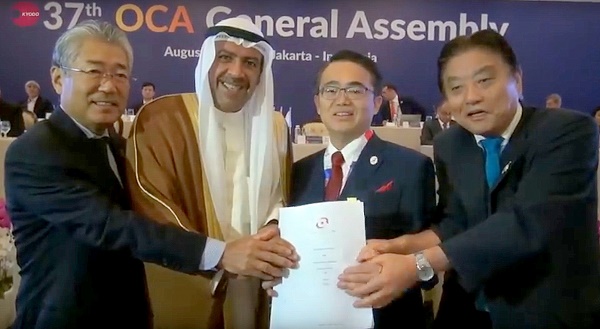 Conclusion of the host city contract of the 20th Asian Games in 2026 and the decision of the event date. The scene after signing (From left: JOC Chairman Takeda, OCA Chairman Ahmad, Aichi Prefectural Governor Omura, and Nagoya Mayor Kawamura). August 19, 2018

In April 2017, ① Olympic Council of Asia (OCA) announced that “e-sports” will be an official medal event in the “Asian Games” held in Hangzhou, Chine in 2022. In last year, 2018, “e-sports” was held as a demonstration game at the 18th Jakarta Games in Indonesia. The 20th Asian Games in 2026 is decided to be held in Nagoya, Aichi, Japan.

It is likely to be adopted as an official event of the Olympic Games at the Paris Olympic Games in 2024, or at the latest at the Los Angeles Games in the United States of America in 2028.

It can be said that 2018 was the first year of e-sports in Japan.

Eradication of negative image of the games

E-sports stands for “electronic sports”. It can be regarded as sports born from the game. However, many people have a negative image on the game. It is often said that “The game itself damages the human brain” or “People who have damaged brains tend to do bad things” etc. Professor Masato Taira of Scientific Research Division of the Graduate School of Nihon University, analyses such negative image, by saying:
“The argument which generalizes all the games in negative way is inappropriate and strange,” he said. “There are various actual games, some of which require reflexes, some put you in the position of a protagonist for fight, and some require role-playing. In case of games that do not use visual senses and hand, games in which conversations take place require a player to use his brain in the same way as in the daily life. Like “Tekken”, although a player does not move his body on his own, he uses his brain as if he is moving his body, “he said.

“Just because the game is made interesting, there is a danger of ‘being hooked’,” and “What is important is the problem of literacy (understanding and properly utilizing the game), namely ‘how to deal with the game well’ “, he explains. Unfounded negative images should be wiped out.

There are games that use classic boards, or cards, and games that are video games (TV games) and personal computer (PC) games. But those that are adopted as “e-sports” are a title type game software used in video games and computer games. Examples are combat-type puzzle games mainly based on battle type, sports games mainly focusing on soccer and baseball, racing games and shooting games. 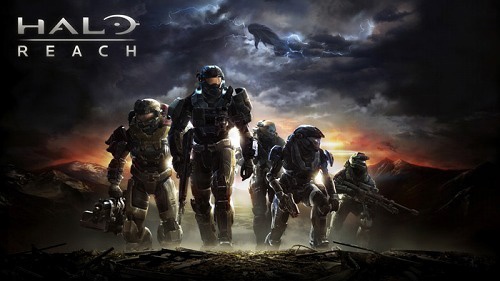 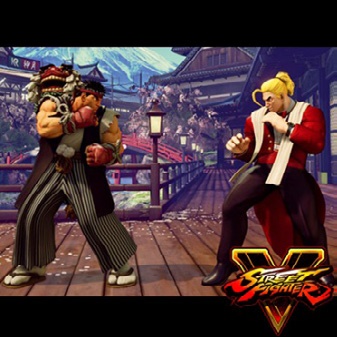 Especially combat games such as “Street Fighter” and “Tekken (Iron Fist)” are representative works of combat type which became standard game titles of “e-sports”. (Quoted from Quarter Salaam No. 24 “E-sports Spreading in the Middle East”)

6 events of demonstration game at Palembang competition in Jakarta, Indonesia 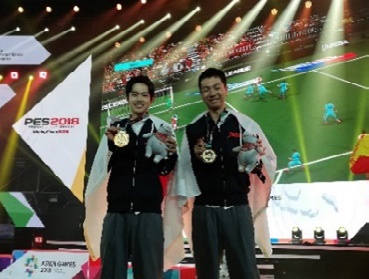 In the “18th Asian Games (ASIAD 2018)” held in Indonesia from August 18th to September 2nd, e-sports was adopted as a public event. ② Six kinds of events were held.

Japan was represented by a team of Japanese sports e-sports delegates dispatched by the Japan e-sports Union (JeSU), and the team of Naoki Sugimura (21) and Tsubasa Aihara (18) won a gold medal after close battle with Iran in the division of 2018 Winning Eleven.

E-sports events to be recognized as the official Olympics events

It is interesting about what official e-sports event will be adopted at the Asia Olympic Games in Hangzhou, China in 2022, but what is even more interesting is the official e-sports event to be held at the Olympic Games that follow afterward. Despite the fact that it has not been decided that e-sports will be officially adopted for the Olympic Games, fever of such speculation is rising. This is because it will greatly influence future e-sports and the direction of the game industry.

The clue to those questions is the following remark by IOC President Thomas Bach. “Violence, homicide games are not good. It is not suitable for the Olympic Charter.” From this one can guess that official games will be soccer Winning Eleven, and baseball Power Pro game. Maybe for combat games, Iron Fist and Street Fighter.

Expansion of game population and spread of game watching culture

It is said that the world e-sports game population is about 50 million, and the Internet viewers are estimated to be 400 million people. Many of them are in China and South Korea, and it feels like the game super power Japan is lagging behind. Although e-sports competitors in Japan have high ability and there are many of them, e-sports in Japan has not prospered. The reason for that is the particularity of the Japanese domestic game market. Domestic games and mobile game machines are strong, and Role playing games (RPG) and action games that are not very suitable for e-sports have strong popularity. 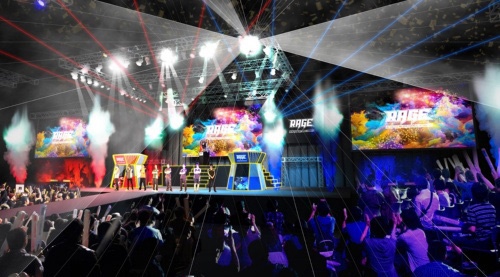 At this time, the situation changed suddenly. With the spread of the smartphone, this situation is changing. The popularity of fighting-type games such as smart card games constantly connected to the Internet, Shadowverse and Crash Royale (Kurarowa) has soared in popularity and the total number of players also increased.

“A representative event is ‘RAGE (Rage)’ is a comprehensive tournament where popular titles such as the card game “Shadowverse” and combat game “Street Fighter” are held. In the first audition in 2016 had audience of 150 people, but in September this year about 10,000 people visited the 9th tournament event”.

The game professional athletes fight for a large prize money, and audience watch the fighting scenes with events and videos. Mr. Shingo Otomo, executive officer of CyberZ and comprehensive producer of RAGE, said, “The culture of watching and enjoying e-sports in Japan is immature. I want to make game watching culture take root in Japan.” 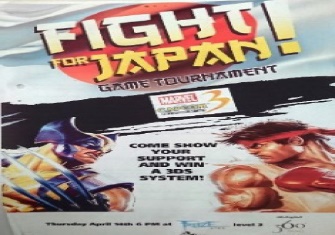 Kuwait is the country that has steadily promoted the promotion of e-sports in 6 Persian Gulf countries including the Saudi Arabia, the United Arab Emirates, Kuwait, Oman, Bahrain and Qatar. In the year of 2011 Great East Japan Earthquakes, Mr. Joseph Alroumi held e-sports event for disaster reconstruction. He has been visiting Japan’s Tokyo Game Show for 10 years and promoting video game shows (e-sports events).

From 2014, GameExpo was held every year to expand audience mobilization, and professional players participated from 14 countries, and over 1,000 spectators over 22 years old attended the event in 2018. The Japanese ambassador and Japanese consul in Kuwait also came to the event.

During his stay in Japan last December, he had a meeting with the Salaam Association. An interesting story was shared there. “The current Minister of Commerce is a game lover and resembles former Japanese Prime Minister Aso. But most government officials have never watched a real game competition while showing their understanding of e-sports. They can be said to be unwilling to try it. We are going to invite government officials to this year’s competition.” According to him, “There are about 30 high level game players. There is even someone who won against Mr. Daigo Umehara (Japanese pro gamer, international champion of 2D fighting type combat game) in competition against him in Kuwait. In Islamic culture and customs there is still lack of understanding of the game and the recognition of e-sports is still low. But I have been fighting against such a trend through GameExpo. It is the most prosperous country among the Gulf countries in term of e-sports.” He talked enthusiastically. Kuwait and Japan have different cultures and races, but it is sensed that two countries have common challenges in the road to e-sports. 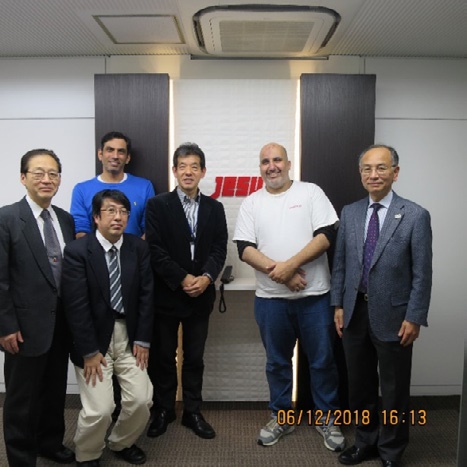 Mr. Yousif Alroumi, second person from the right, JeSU Board Member Minoru Kabuta, the 3rd person. The person in far left is Mr. Ikuzo Kobayashi, Chairman of the Salaam Association

In February 2018, the Japan e-Sports Union (JeSU) was founded. The Japan e-Sports Association which has aimed at joining the Japan Olympic Committee (JOC), the E-sports Promotion Organization which has supported improved treatment of e-Sports athletes (development and enhancement of athletes through higher compensation for professional athletes) and the Japan e-sports Federation which has aimed at joining the International Olympic Committee (IOC) through establishment of professional license system for elevated awareness of e-sports athletes and their social status advancement and improvement of game operation, development of judges and staff and athlete education program – those 3 e-sports groups merged and founded JeSU.

In order to send e-Sports Japan national team to Asian Games and the Olympic Games, JeSU must become a JOC affiliate. If e-sports related groups in Japan are united and the game industry puts full support systematically, it becomes possible to build up the system of all e sports, all-games industry, and all Japan. If this is achieved, it seems to be possible to break through all the challenges.

It can be said that the birth of JeSU in 2018 was a big step forward toward that goal.